In 1985, Douglas Adams said the BBC’s view of the first series of The Hitchhiker’s Guide to the Galaxy was like Macbeth’s attitude to murder: “Initial doubts, followed by cautious enthusiasm, then greater and greater alarm at the sheer scale of the undertaking.” Those days are, however, long gone and the BBC is marking the 40th anniversary of Adams’ ground-breaking creation in style.

The original cast has been reunited to record a new radio series of the intergalactic comedy that, from small beginnings in 1978 on Radio 4, grew into a juggernaut that spawned a TV series, a Disney film, a much-loved series of books, several stage shows and even a video game.

The first person I meet when I roll up at a recording session is Lenny Henry, who is playing a Mephistophelian character called The Consultant. He gives it his all, deploying that remarkable basso profundo voice as if he were playing King Lear. Henry appears alongside Simon Jones and Geoffrey McGivern, the original Arthur Dent and Ford Prefect, the double act at the centre of Adams’ creation.

What makes the performance all the more poignant is that they are playing a scene written by Adams but never previously recorded. The new series combines unpublished material, dug out of Adams’ notebooks by archivist and superfan Kevin Jon Davies, and newer plotlines drawn from And Another Thing, Eoin Colfer’s book continuing the saga, which was commissioned by the Adams estate after the author’s sudden death at the age of just 49 in 2001.
Davies says the key to Adams’ work is that he is not a science fiction writer: he is a satirist and Hitchhiker is a modern Gulliver’s Travels. “Douglas didn’t set out just to do sci-fi,” he explains, “but he said that whatever he was writing ended up with robots and spaceships. His real literary hero was PG Wodehouse.” If you see Adams as Wodehouse with spaceships, you start to understand his humour.
Arthur Dent, the quintessentially English hero of the series, is one of the few survivors when Earth is destroyed by the Vogons, who are constructing a hyperspace bypass. Dent is rescued by Ford Prefect, a know-all alien who works as a researcher for the Hitchhiker’s Guide, an electronic encyclopedia full of useful (and sometimes bizarre) information.
The guide anticipated ipads and the idea of the Babel fish – a yellow creature that, when placed in the ear, provides an instant translation service (allowing Arthur to understand Vogons when he hitches a lift from the disintegrating Earth on their spaceship). Fittingly, there is now a translation site called babelfish.com.

Adams’ farsightedness explains why the entrepreneur Elon Musk is such a huge fan: Musk says reading Hitchhiker as a teenager changed his life and liberated him from his “existential crisis”. When Musk shot one of his Tesla Roadsters into space recently attached to a Falcon rocket, it had the words “Don’t Panic” emblazoned on the dashboard – echoing the cover of the original Guide – and there was a copy of the book in the glove compartment. Musk also included a towel, the accoutrement that Ford Prefect says no space traveller should ever be without (Hitchhiker fans celebrate Towel Day on 25 May each year).

In the new series, Arthur and Ford Prefect visit the tiny planet of Nano, where they find an Irish community run by a chancer called Hillman Hunter (played by the comedian Ed Byrne). The colony is getting unruly, so Hunter wants a God to supply a few rules – God, or the lack of one, is never far away from Adams’ concerns – and begins conducting interviews for the role. Meanwhile, the Vogons have also discovered the existence of this unlikely Irish colony and are naturally sending a force to eradicate it.
Fans will be pleased to learn that Marvin the Paranoid Android, the depressed super-robot with a brain the size of a planet, makes a welcome return, this time voiced by another high-profile guest, Jim Broadbent. Marvin was killed off in episode four but here pops up in virtual reality.
Kevin Jon Davies vividly remembers hearing the first episode when he was 17 and instantly falling in love with the show. He met Adams soon after to record an interview about Doctor Who – Adams was a script editor. “Hitchhiker’s became my favourite thing,” says Davies, “because it combines the best of The Goons, Monty Python and Doctor Who.” Davies thinks the 2005 Disney film was a less than resounding success critically because Adams’ idiosyncratic writing had been changed for Hollywood. “It’s like a pullover,” he says. “If you start picking at threads, the whole thing falls apart.”

The new radio series will take no such liberties. Dirk Maggs, one of the original producers, is in charge of production, and there’s a photograph of Adams in the control room to remind everyone who was responsible for the original big bang.
“I wasn’t going to come back,” says Maggs, “but it was the 40th anniversary and I knew there was some Douglas material that hadn’t been used. It was also a chance for Arthur, Ford Prefect and Zaphod Beeblebrox [the narcissistic two-headed galactic president] to say goodbye.” Maggs says he has done his best to interpret Adams’ original intentions, but still worries about what the master would have made of it all. “If there is an afterlife,” he says, “I expect him to be waiting for me with a cricket bat.”
In a break from recording, I talk to Jones and McGivern, forever associated with the befuddled, pyjama-wearing Arthur Dent and his super-smooth sidekick Ford Prefect. Now in their mid-60s, they were both members of Cambridge Footlights, where they first encountered Adams. Jones says Adams wrote Arthur with him in mind, while McGivern reckons he inspired Ford Prefect. “My father read the first book and when he read the description of Ford, he said to me, ‘That’s you at the age of 21’ – which is slightly concerning. The role always felt comfortable.”

It was a useful calling card. And it was better than the terrible trap of being in a soap 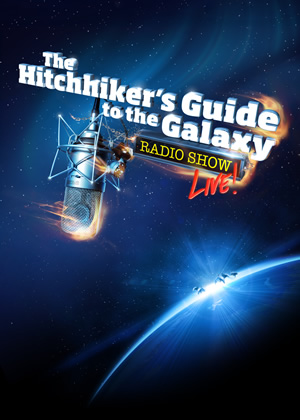 The pair say they have never worried about being defined by the roles. “It’s been a useful calling card,” says McGivern. Jones laughs at the prospect of a headline reading “Arthur Dent dies” over the story of his own demise. “If I drop dead in the street,” adds McGivern, “and anybody bothered to write ‘Hitchhiker’s man dies’, that would be OK. We’re jobbing actors. In any case, it’s not that terrible trap of being in a soap.”

Mark Wing-Davey has played Zaphod from the beginning. He recalls being at a dinner party when the first episode aired. His host and fellow guests were not exactly blown away by what they heard. “After about 10 minutes, I realised it wasn’t for them,” he says. “It was hard to predict what it would become.”

Wing-Davey starred in the BBC’s 1981 TV adaptation, but has doubts about whether it really worked. “It felt very rushed,” he says, “and it didn’t feel as if there was quite as much enthusiasm to push the boundaries. Douglas himself was an enthusiast: he was curious about computers, nature, the world – and that enquiring mind was part of what made it so interesting, together with his quirky observations.”

Could there be a 50th anniversary? Wing-Davey says “never say never”, but the likelihood is that this is the end of an extraordinary intergalactic voyage. Davies thinks it will now be up to future generations to reinterpret Adams’ books in the way that classic creations such as Sherlock Holmes and Tarzan have been rebooted. “I think Hitchhiker’s has now earned its place,” he says, “and that when we’re all long gone there’ll be other people making versions of it. Arthur Dent and Ford Prefect will be played by actors as yet unborn. That’s where Hitchhiker’s is going – off into the future without us.”